Dave Graney and the mistLY – The Bunker

In the bowels of the Coogee Diggers club, The Bunker fills with suburban punters ready to take in the latest offering from urban troubadour Dave Graney and his mistLY. This gig was all about touring his newest offering ZIPPA DEEDOO WHAT IS/WAS THAT/THIS?

Tonight’s incarnation was made up of a three piece featuring Dave Graney on guitar and vocals, Clare Moore on drums and Stu Thomas on what Dave likes to call “bass”.

As always, Dave was sartorially resplendent in what was close to a zoot suit with his ever present, jauntily cocked hat. A picture of an urban dandy, with his usual laconic banter in between songs that was lined with sharp barbs. There was always plenty to say in introducing each of his well-crafted life observations that make up his music. Songs of politics, fashion, and inner city culture. 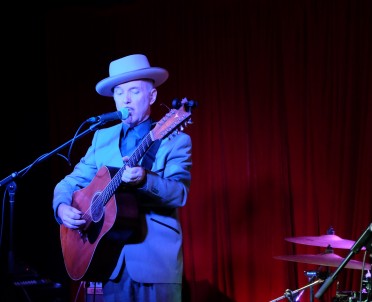 The gig had a good smattering of songs from an impressive back catalogue, but also ventured into the new album that has the feeling of a little more punk grit, like a slightly corked fine wine. As always, Clare Moore kept the band on track with a railroad straight beat, allowing the bass to play around a little with a bit of groove and of course Dave to do his thing, adding his accents on guitar and vocals. Check out the new album here.

And was that Brown Note hiding in the Bunker? Not tonight.