Abbe May graces the green glowing stage with a free gig at the Union tonight touring her new album Fruit in a solo show. I caught the show and support act Particles

This Sydney post punk two piece know how to make some noise. They exploded into some very heavy tunes with expertly wielded thunderous drums and a noisemaker of a guitar they quickly pushed their equipment to the edge. Their live sound featured a less electronic influence than their recorded tracks with a hell of a lot more raw energy and penetrating rhythms. 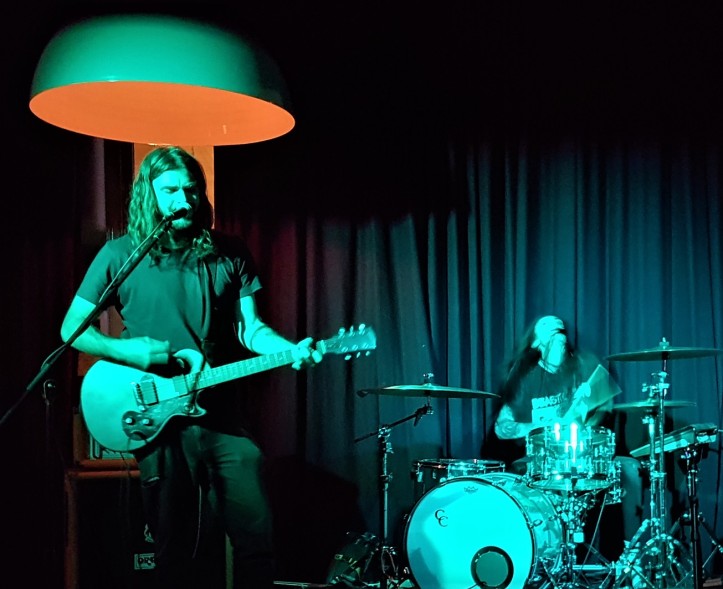 They did have some technical difficulties, making some running adjustments through the set, including a guitar amp swap when the raw power was just too much for that Orange amp and a disintegrating double kick pedal. But they managed to calmly just work through it, swapping out gear and carrying out running repairs in Olympic times to just get back on with the business of rock.

These were heavy tunes reminiscent of early age Seattle sounds featuring crazy distorted guitar and machine gun thumping drums, double kicks, arms and hair flailing wildly. The drummer went through a whole bag of sticks projecting them through the air and all over the stage with enthusiasm.

The end of the set was punctuated by a bit of drum kit deconstruction and the slamming of a slowly shredding crash symbol out onto the floor in front of the stage as a final ringing outro.

There may have been a Brown Note there but there were too many flying drum sticks to notice.

Sneaking onto the stage and quickly launching into some older bluesy guitar tunes, Abbe May immediately got the swelling crowds attention.

Although she was playing a solo gig tonight she had the help of her band in a box on some tracks to fill in a few bits and pieces. Even though on her own, the show never felt lacking, her honed guitar skills and easy story banter between songs made it all look too easy, making a quick connection with an adoring crowd.

From a start with some older back catalogue tunes, she stepped up into her new album Fruit. These tunes came with a new soul and r’n’b incarnation to her music, getting the crowd bumping and grinding along with her on a very personal journey.

No matter what the musical phase of an Abbe May gig you get, there is always an underlying seething sensuality that infiltrates from the stage out into the crowd and tonight was no different. Now a staple of an Abbe May gig, her grinding cover of Ginuwine’s Ride my pony whipped the crowd into a frenzy and got Abbe bursting into fits of laughter – tongue firmly in cheek.

To mix it up a little, Abbe got Particles drummer Skarlett to join her on an unrehearsed and raucous version of Taurus Chorus – the crowd lapped it up.

All over too quickly with not even a chance to summon a Brown Note.