Tonight the Marrickville Bowlo hosts a punk’o’rama of a night with Bunt, Strawberry Fist Cake and the legendary Guitar Wolf. The Mohawks were out and they were not going anywhere but into the mosh.

Throw together some roaring Detroit punk, a tab of 60s psych, a dash of 90s indie and shake vigorously – BUNT emerges screaming like a newborn baby. A Sydney band who have been around for a while and not getting the recognition they deserve.
Tonights performance was electric, full of energy and a little bit angry. Lots of banter but no rambling – all for entertainments sake.

Brown note candidacy in these ones.

These four OI! punk rockers from Melbourne bounce out classic 70’s punk tunes sometimes descending into bouts of pirate like drinking songs. Obviously a bit of Rancid and Drop Kick Murphys is listened to on the tape in their touring van.

What do you get when you mash Elvis, The Ramones, a bit of Sex Pistols and Tokyo together – crazy Japanese punk which is Guitar Wolf. 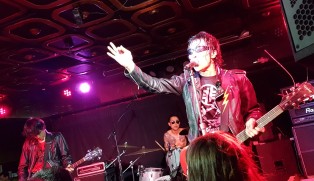 A healthy mosh pit formed in front of the band, complete with Mohawks and studded belts – but all in a friendly way. There was even a successful building of a human pyramid on stage – much delight to the mostly drunk crowd.

Surely the brown note was all around us tonight, but I think I was too deaf to hear it