Regurgitator got together with the Sydney Festival and the Metro Theatre to stitch together a stellar line-up of Australian acts, to raise some sorely needed funds to support recovery from the recent Australian bushfire devastation. Over $65,000 was raised in proceeds from the night, all being donated; with all the artists, crew and suppliers volunteering their services on the night. You can still help out by donating to the Red Cross Disaster Relief and Recovery Appeal and WIRES Wildlife Rescue organisation.

The legendary artists donating their time on the night were Neptune Power Federation, Regurgitator, Art vs Science, Custard, Polish Club and Dan Sultan. Check them out and give them some love.

Dan Sultan started with a gentle entry into the night with a bar stool and an acoustic guitar. Tonight he was accompanied by Jai Perry Banks on the lap steel guitar to complement his amazing voice. 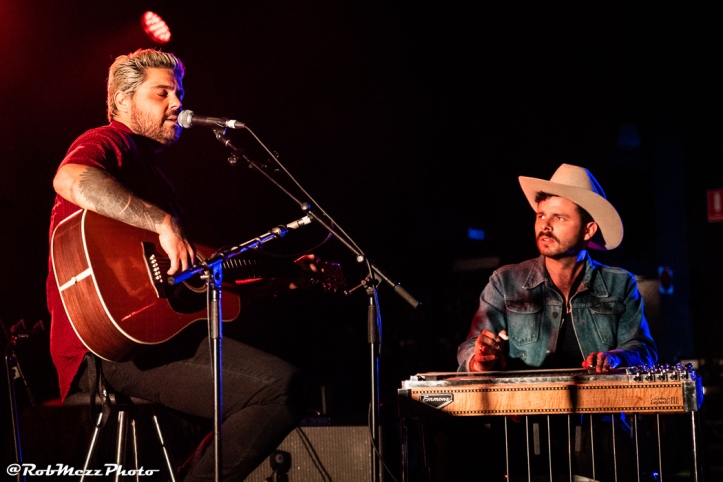 With his heart on his sleeve and passion in his voice, the set, full of quiet and soulful country tunes wafted power over the growing crowd. There were covers from Paul Kelly and Elvis, in amongst his own songs, all given that Dan Sultan treatment.

At one stage through the set there was a building bee-hive hum of conversations through the quiet songs which was quickly put down by a little shouted encouragement from the crowd; and responded to by a belting rendition of House of the Rising Sun and Old Fitzroy.

All through the set, there was a little bit of Elvis sneaking into Dan’s vocals; but for the last song of the set, which he wrote about his new 7 month old daughter, he just let it bust right out & let loose, much to the crowd’s delight.

After a quick stage turn around, Polish Club brought the noise to the house. Playing as a three piece tonight, with drums, guitar and bass, they were definitely on a mission.

Front man, Novak, immediately throws out a challenge tonight to personally donate $50 for every time he dropped the F bomb through the set. And there were lots, especially through some fruity, in-between song banter and a very heartfelt version of Don’t Fuck Me Over! 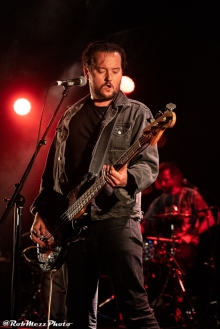 All through the set, the powerhouse of drummer JH, was complemented by a thumping bass to drive that rhythm section; while Novak’s guitar was free to assault the dancing crowd with thundering power chords and lilting riffs; all while belting out vocals with that voice that came straight out of the 70’s deep soul. 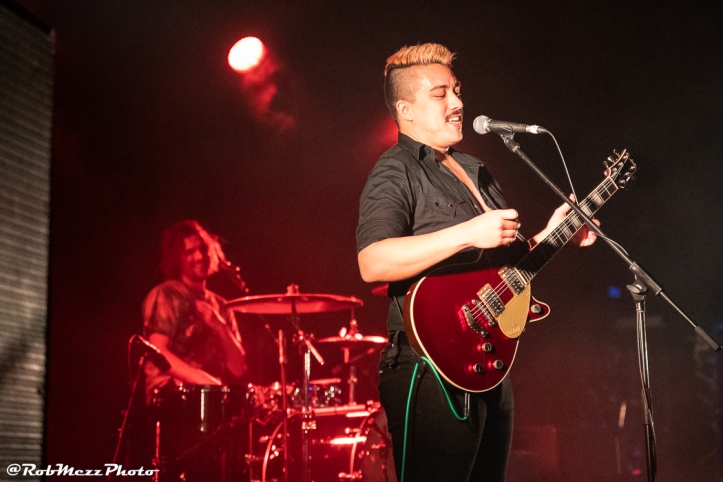 Custard hit the stage like the seasoned performers they were. No nonsense. Straight into it with a mission to win over the crowd with the little time they had.

They played a well-planned set that was as tight as a drum, with that perfect mix of indie guitar raucousness and quirky melodies; all rounded off with Dave McCormack’s vocals telling his offbeat stories. 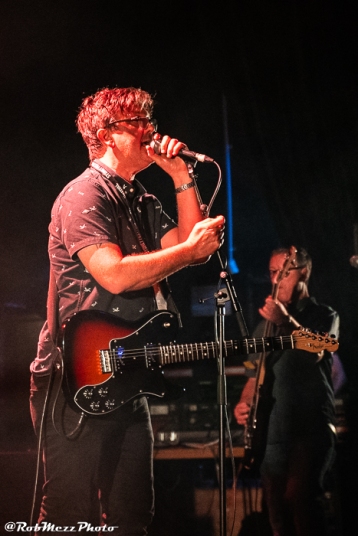 By mid-set they had the crowd singing to old favourites Take the Skinheads Bowling, Music is Crap and Girls like That. After that it was obviously time to turn the disco up, crack out the cheesy 80’s disco bass lines and get the crowd dancing and singing R-I-N-G-O.

The set finally wound up with a fast medley of hits Lucky Star and (after a little false start) New Apartment.

With the crowd now heaving and well and truly warmed up, it was time to bring on Art vs Science. And they didn’t waste any time, cracking open the set with Magic Fountain and immediately had the Metro theatre heaving, turning the dance floor into a trampoline.

Metronomic drums, twin synths and some heavy metal guitar riffs ripped through the front of house – all propelled by front men Dan and Jim running, jumping and inciting mayhem. 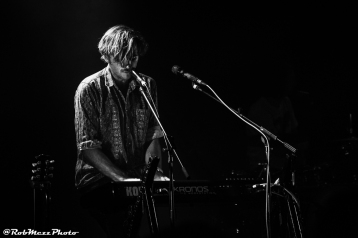 By the time they played Parlez Vous Francais they had the crowd eating out of the palms of their hands, like some madcap puppet masters directing the heaving mass of bodies – and it went off like a cracker. If you weren’t moving at that point you were a candidate for a weekend at Bernie’s.

Before, the more mature members of the audience expired from the mayhem, the set, full of absolute bangers, wound up and left us all exhausted but beaming.

Playing no small role in bringing together the line-up of bands tonight, Regurgitator literally bounced onto the stage raring to go. No costumes tonight, they were here to close the loop from electro dance to indie punk pop and hip hop. 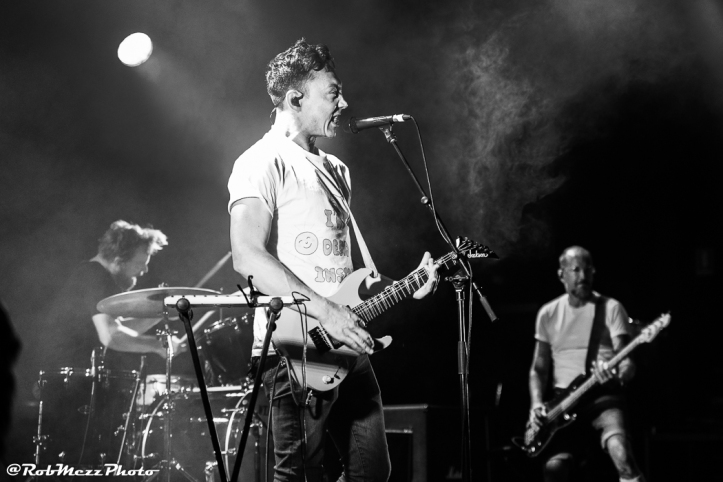 Launching into cheeky political commentary early, they dedicated Sucked a Lot of Cock to Get Where I am to our Prime Minister and left it at that…………. 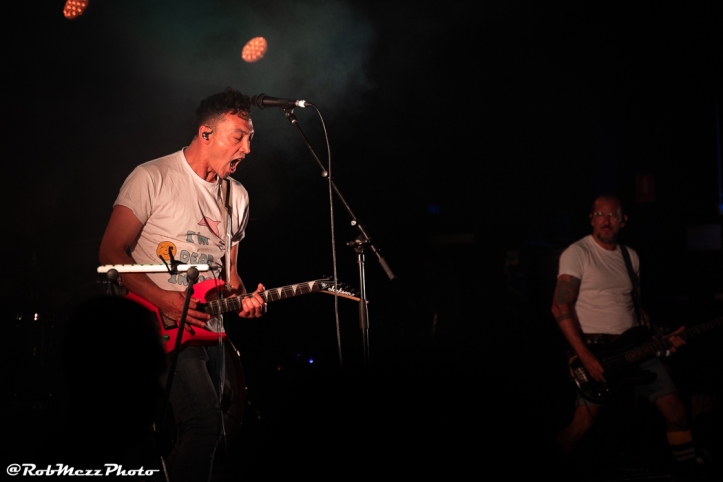 What followed was a cascade of thunderous tracks that turned the dance floor into a heaving mass of bodies through the rest of the set, with an all in crowd chanted chorus for Black Bugs.

They finished off their set with Best Friends Forever, from their new Pogogo Show joined by new best fried Coco. 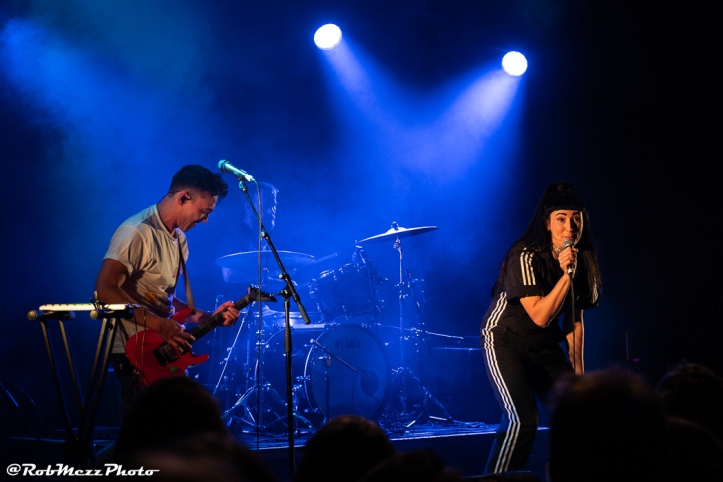 Closing off the night as a special treat for the stayers; the Neptune Power Federation brought its Cadillac load of black magic and mind bending, ear splitting chaos.

Led by Screaming Loz Sutch, AKA the Rat Queen; this band of black clothed, metal-axe wielding demons and wailing cloaked druids brought the fire and smoke to the Metro.

The show was a sensory overload of metal mayhem – a rock opera ascending directly from the pit of hell. With drums that could split heads and duelling guitars spitting notes like a machine gun; the show was hammered home by the piercing vocals of Screaming Loz Sutch, sealed by the demonic choir hiding in the shadows. 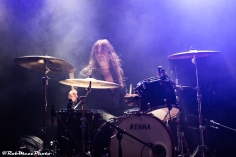 The end of the show brought the Rat Queen into the crowd, anointing the chosen few with her unholy communion as she drifted up and disappeared into the heavens…or hell.

And the Brown Note? – it slithered off to Engadine Maccas.