Another round for the Cosmic Psychos at the Lansdowne, touring their unique brand of no nonsense punk rock. Tonight they are supported by Ute Root and Pist Idiots.

Five blokes from the burbs hit the stage and basically did their thing. What was their thing – well it was a little hard to know except that in involved beer, guitars, bass, drums, fun and a very obliging crowd.

The band flipped through a set filled with hard edged rock, loud raucous punk and then threw in a few anthemic ballads just to confuse people. The crowd were having none of that and basically lived up to the bands namesake. Lots of writhing, crowd surfing, bouncing off each other and generally having a time of it. The mosh was well and truly alive – no matter what speed the band were playing at. This was true suburban rock. Check em out here.

Sauntering out onto the stage like it was a second home, the Cosmic Psychos owned the joint as soon as they appeared. A quick chat, no pissing about, a swig of beer, then full volume garage punk rock straight off the farm.

Amps all set to stun, always teetering on the edge of blowing a gasket and succeeding half way through the set (cue quick amp swap), the fuzz laden guitars drove the crowd into a massive frenzy, with a vortex of a mosh pit collecting people like a black hole and then spitting them out like a gravitron. 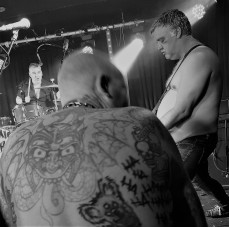 There was all the usual arms, legs and bodies flying in every direction that we have come to expect at a Cosmic Psychos gig.

Everyone came out with a smile…..and deaf.

And the Brown Note – all over the floor.